South America / Ecuador And The Galapagos

Located in a narrow valley some 2,850 metres above sea level, Quito is one of the world’s highest capital cities, with a stunning setting amid the snow-capped Andes Mountains. Dominated by the Pichincha volcano, the city wends its way around the slopes – offering a little thrill to all visitors given the stratovolcano’s active status.

In previous years, Quito was often overlooked and just used for a stopover for a night before continuing to the Galapagos Islands. However, since the sympathetic redevelopment of its colonial centre the city has been awarded UNESCO World Heritage Status, meaning exploring is now a joy. The historic Franciscan centre is one of the largest and best preserved in South America, its colonial streets home to a treasure trove of architectural gems such as grand mansion houses, opulent churches, monasteries and museums; a visit to the old quarter should feature on all holidays to Ecuador.

Ecuador is also famous for its markets – the most famous of which is just a couple of hours outside the capital in the town of Otavalo. Surrounded by volcanoes, here you can head to the Plaza de Ponchos and barter with traditionally dressed indigenous townsfolk who will sell you the colourful textiles for which Ecuador is famous; you can find out how the fabric is made at exhibitions and demonstrations at the Tejidos El Obraje Museum nearby. With no shortage of beautiful crater lakes, towering volcanos and a strong indigenous culture, a day trip or preferably an overnight stay from Quito is not to be missed.

The Equatorial Monument (or locally known as the “Middle of the World Monument”) is another sight easily visited from Quito. Stand with one foot in the Southern Hemisphere and one foot in the Northern. The 30-metre monument was built to commemorate where the famous 18th-century explorer calculated the equator line to be, to only find out it was 240 metres North of there! Visit the Ethnographic museum inside the monument and don’t forget to pick up your certificate for having crossed the Equator!

Call our Travel Specialists for Ecuador today for inspiration on holidays to Quito. 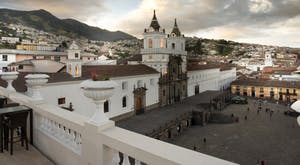 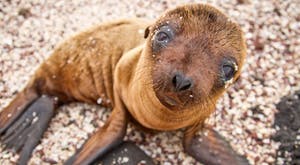 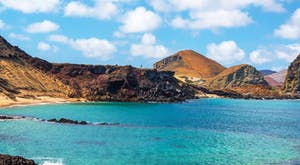 Ecuador and Galapagos in Style